* In case of any delay in receiving the OTP, you may verify it later. Please proceed without verification.

Your mobile number is not registered with us. Please register your mobile no.

Enter your City name or Pincode

Most of the land in Rajasthan is covered in sand and the weather is dry, which is precisely the same with Dausa. The geography of Dausa has a varied habitat, soil nature, crop irrigation, variety of flora and fauna.

Location of Dausa
Dausa city is located in Dausa district and it is surrounded by 6 districts, namely, Tonk, Jaipur, Karouli, Sawai Madhopur, Alwar and Bharatpur. The Duasa district has total area of 3404.78 square kilometers and it is almost semicircular in shape with towards east and west at corners.

Agriculture and main cropping of Dausa

Dausa district has 219575 hectares of land of which approximately 59 percent (128169 hectares) is under irrigation. The crop mainly consists of barley, groundnut, cotton, maize, mustard, wheat, pearl millet and several grams. The crop is rotational according to seasonal variations and climatic conditions.

The Kharif crop is otherwise known as monsoon crop and its duration is roughly in between June (beginning of rainy season) and October. In Dausa, the groundnut and maize are produced in irrigated areas. The soil of Dausa is finely textured and varies from yellowish to dark brown tones depending on composition. Dausa soil type is usually suitable for all variety of crops. The soil erosion is prevented by the watershed schemes implemented by local bodies for crop irrigation. Before seed sowing, the land is prepared by application of fertilizers to achieve higher production. 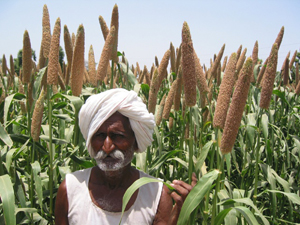 During spring harvest, the mustard and gram is sown from September to October, in non-irrigation soil, while in the irrigated soil, gram, barley and mustard are sown in October-November, while the wheat crop is cultivated in November and December. Rotational crop system is highly in use, in Dausa. The cyclic rotation happens as green gram - wheat, groundnut - wheat, green gram - mustard, pearl millet - mustard, pearl millet – green gram and so on. The main crop of Dausa in monsoon season is pearl millet, while wheat is the important food grain crop in spring season.

The hills of the Dausa district are parts of the North Aravali ranges. Distinguishing the boundaries between Dausa and Sawai Madhopur districts, the Lalsot-Bayana Hill range runs from Lalsot to Bayana. The Aravali ranges constitute a sequence of beds from Lalsot to Bayana ridge. A composition of alternative band of dark and light minerals is predominantly found in the hills of Dausa.

Dams and Rivers in Dausa

Dausa consist of couple of main rivers namelyMorel and Ban Ganga rivers. There are approximately 36 dams in the entire district of Dausa and the total capacity of dams is 7074 MCFT. Madhosagar Bandh, Moral Bandh, Kalakho Bandh, and Sainthal Sagar are the major dams.

Flora and Fauna in Dausa

Dausa is home of a varied range of flora and fauna. The flora usually lists as thorns, shrubs and herbs as it has dry climatic conditions. The natural vegetation found in Dausa includes Asenegal (Kumta), Anogeissus (Dhok), Acacia nilotica ( Babool ), Capparis(Kair), and Caotropis (Ak) and Prosopis (Khejadi).

Dausa sustains significant biological diversity despite of its low forest land. The commonly found fauna of the region include the monkey, black buck, peafowl, panther and the lemur. Monkeys dominate the other fauna population, while they walk freely on city streets. They are often found performing their monkey stunts, using their light figure technique in stealing food from households and market areas. Banana vendors in the market must have a sharp eye for these monkey mobs, while a wooden stick can do the job in shooing them away.

Are you a Business Owner?

Add the products or services you offer